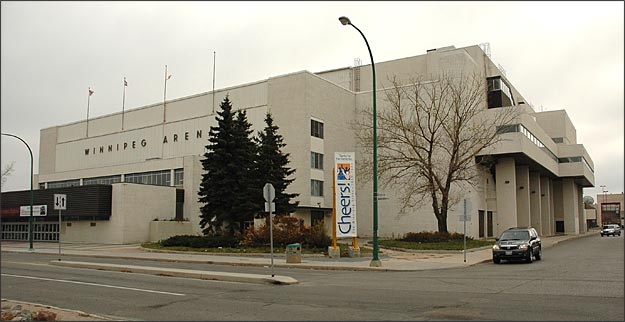 Winnipeg Arena, opened in 1955, was home ice for the Winnipeg Jets from 1972 to 1996. For that reason and more, the venue was an important landmark with rich history for Winnipeg residents and hockey fans around the world.

Shea’s Ampitheatre was a 5,000-seat indoor arena the city of Winnipeg had outgrown by the early 1950s. Newly constructed Winnipeg Arena had a hockey seating capacity of about 9,500, and was considered a state-of-the-art hockey venue when it opened. By the time Winnipeg Arena closed, it had expanded its NHL capacity to 15,393 seats.

The first hockey tenants of Winnipeg Arena were the Winnipeg Warriors of the WHL, who played there from 1955 until 1961. In 1972, the Winnipeg Jets were created as part of the new WHA, and brought lots of excited, local hockey fans through the gates.

When the Jets were in the WHA, from 1972 until 1979, it was arguably the most exciting and innovative team in hockey. First and foremost, the Jets successfully signed Bobby Hull, who had achieved legendary status with the Chicago Blackhawks and gave the new league instant credibility — to say nothing of giving Winnipeg Jets fans something to cheer about on the ice. At the same time, Winnipeg pioneered new territory for players: Europe. Among the Jets acquisitions were stars such as Ulf Nilsson and Anders Hedberg. The Jets were good enough to whip the Soviet National team 5-3 in 1978, a remarkable feat in that era. The Jets captured the Avco World Trophy three times in the 1970s and were the dominant WHL team until it was absorbed into the NHL in 1979.

Because the Jets had to give up key players and were stuck with low draft picks, the team performed poorly in its first years in the NHL, including a franchise-low nine-win season in 1980-81. Despite the setbacks, the Jets built themselves back up and became regular Stanley Cup playoff participants later in the 1980s.

The most memorable tradition of Winnipeg Arena was unquestionably the “Winnipeg Whiteout,” which started in 1987. Jets fans came to the stadium in white to combat their arch-rival Calgary Flames red-garbed fans in their 1987 Stanley Cup playoff series. The Jets won the series 4-2, turning the Whiteout into a regular affair. The ghostly, intimidating white blanket within the arena walls made an impression on everyone, players and fans alike.

The Jets left Winnipeg for financial reasons in 1996, heading to Phoenix and changing its name to the Coyotes (now Arizona Coyotes). This was obviously a huge setback for Winnipeg Arena, although the Manitoba Moose of the IHL became a tenant right on the heels of the Jets’ departure.

In 2004, MTS Centre (now Bell MTS Place) opened in downtown Winnipeg, with the Manitoba Moose as its flagship tenant. This spelled the end of Winnipeg Arena, which was demolished in 2006. When Winnipeg Arena closed its doors in 2004, many former Jets players, including Hull, were on hand for closing ceremonies.

A new Winnipeg Jets team (a different franchise from what is currently the Arizona Coyotes) has played its home games at Bell MTS Place since coming to Winnipeg from Atlanta (formerly the Thrashers) in 2011.

With all of these franchise and venue changes, one thing has remained constant — the Whiteout. The tradition is alive and well with fans of the new Jets team, as well as in Phoenix, where it is known as the Coyotes Whiteout.