Before we get into the vintage Winnipeg Jets jersey, one of our Top 8 NHL uniforms, let’s cover a little league history.

Don’t get us wrong: The sweaters the Jets currently wear are very sharp and got even sharper with their 2018 update. That said, nothing beats the Winnipeg Jets old jersey, which captured the feeling of the times and continues to be popular to this day.

The Jets Take Off With Bobby Hull 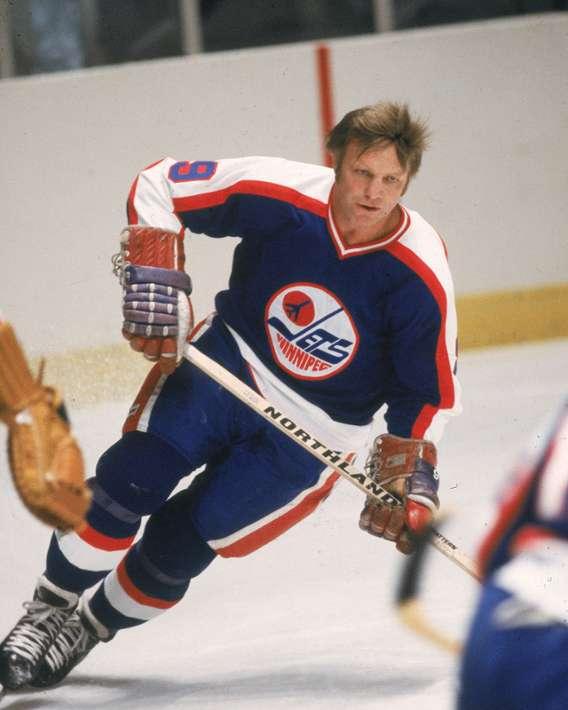 The Winnipeg Jets were making hockey history even before they were absorbed into the NHL (along with three other notable WHA franchises: the Hartford Whalers, Edmonton Oilers and Quebec Nordiques).

In 1972, the Jets snagged Bobby Hull from the Chicago Blackhawks, giving the WHA a big boost in credibility, and needless to say, giving the Jets a nice lift as well. Hull’s move also cleared the runway for other star NHL players looking to join the new league.

The WHA Jets were also the first team in either the NHL or the WHA to energetically look for players across the Atlantic. Bringing in top European players (Anders Hedberg, Ulf Nilsson and Kent Nilsson, among others), the Jets were a force to be reckoned with in the WHA before the league fizzled out in 1979.

Rough Landing in the NHL, But Uplifting Jerseys

The Jets came to the NHL depleted of talent and had a tough time getting off the ground in their first couple of seasons, going 20-49-11 in 1979-80, and a horrific 9-57-14 the following year. Nevertheless, supported by great fans and great uniforms, the Jets regrouped and made the Stanley Cup playoffs 13 times over the next 15 seasons. (The Jets were a solid team and might have gone deeper into the playoffs over that span of time, but they had the misfortune of frequently running up against Wayne Gretzky and the Oilers, and also the tough Calgary Flames, in the division semifinals.)

The original primary logo for the old NHL Winnipeg Jets featured a red, white and blue color scheme. Inside a blue, red-bordered circle was a a blue jet taking off inside a smaller red circle styled like a puck. The word “JETS” was in white across the diameter, with a hockey stick forming the “J,” and “WINNIPEG” was in red underneath, styled like an ice rink. Even though there was a lot going on in the logo, it held together nicely and, thanks to the font choices, gave out a psychedelic vibe perfect for the 1970s — and yet still perfectly appealing today.

In 1990, the primary logo got a major revision. While the overall elements and color scheme of the logo remained almost the same (no puck in this version), the redo was simpler, suggested rapid movement across the ice, and exchanged the hippie-era fonts for a style that was quite a bit sleeker. The rest of these vintage Winnipeg Jets jerseys were equally bold and streamlined — and incredibly simple. The jerseys were either white or blue, with minimal striping on the sleeves and lower torso, the logo in front, and name/number on the back. Nothing fancy, but powerful and memorable: The vintage jerseys are still in demand, and Winnipeg fans still remember their original Jets fondly.