Getting To Know Jonas Gustavsson 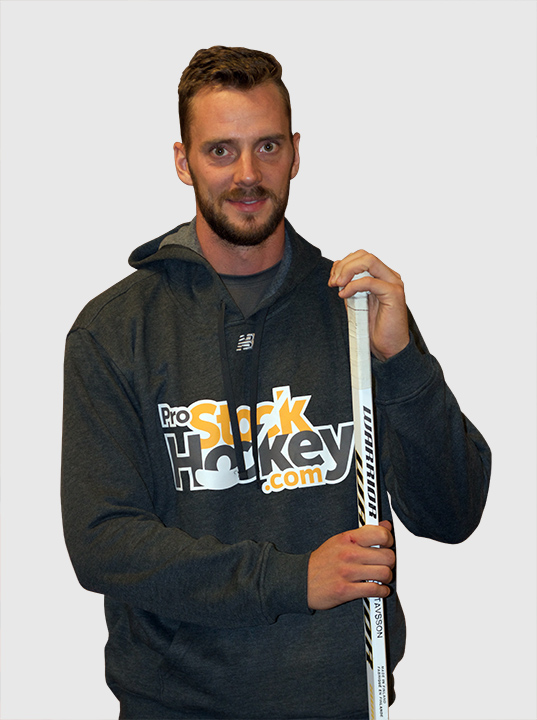 If you've played hockey before, then you know this simple fact:

It takes a certain type of person to want to be a goaltender. To voluntarily stand in the way of a vulcanized rubber disc being propelled towards you at 100+ mph is something most people have a little trouble understanding. They're the last line of defense and are often the most criticized position in the league. Former NHL goalie and Stanley Cup champion, Jacques Plante said it best:

"How would you like a job where when you made a mistake, a big red light goes on and 18,000 people boo?" - Jacques Plante

While it seems like insanity to some people, there are thousands of goalies each year battling for their shot at an NHL roster. When goalies do finally make the jump into the NHL, you can't blame them for wanting to continue using what got them there.

I sat down with 8 year NHL veteran and PSH brand ambassador Jonas Gustavsson to talk about his equipment; what he's currently using, why he's using it and what changes he's made throughout his NHL career.

What brand of stick are you currently using?

I’m using a Warrior (Custom Pro Swagger) … I’ve been using Warrior for four to five years now. Before that I played with Reebok and I wanted to try something new and I liked it so I stuck with it.

Do goalies worry about their flex at all?

I noticed that most goalie sticks are around the same height … does anyone use anything different?

I think, you know, in the end it will just be a tiny difference between the goalies. Like some goalies want it a bit longer, some guys maybe don’t. Me, as a taller goalie, I like it to be as tall as possible. So the length on my stick is as long as I’m allowed to play with pretty much.

What about your curve? Have you made any adjustments throughout your career?

That’s something I used to play around with, uh, 10 years ago. I ended up just liking the curve that I got, and then ever since I’ve just played the same curve. To be honest, I don’t even know if it’s a standard curve or if it’s something that’s somewhat close to standard curve. It’s a pretty big curve — some goalies like it to be flat, but I like to have a decent curve.

Is there any particular reason you like to have a bigger curve? Playing the puck?

To be honest, when I was younger, you know, it was pretty cool to be able to shoot the puck. (Smiles.) It probably started there, but then, over the years you get used to how, if you deflect the puck, you know how it’s going to deflect and all that. If you change the curve and the angle of the blade, you know, all that’s going to be different so then you’ve got to play it differently. So I just got used to the curve that I had and probably I adjusted my game a little bit after that so now I’m used to it being a certain way.

You mentioned earlier you look for a certain feel and weight in your goalie stick — is there anything else you look for?

To be honest, I’d rather have it so it’s breaking right away. Some just … they don’t break, but they’re not good enough. So you think your stick is good and then you’re playing and you can’t shoot the puck and stuff like that. So I’d rather almost have it, when it breaks, it breaks right away instead of a long and slow process where you don’t know if the stick is good or not. But, like I said, in the end it’s just finding a stick you feel comfortable and feel good with.

Is there anything different about the way you tape your stick? I notice you have a little tape in the middle where your hand goes — can you talk a little about that?

Yeah, uh, that actually started a year or two ago. I used to have nothing there. After the season, I just tried some different stuff. I saw some other goalies had some tape there. First I just did a few laps of tape there; then I figured if I maybe get it a little bigger, almost like a ball, you know, that might feel better for my hand. So now it’s more rounded and thicker here in the middle.

So I just tried it and felt like I got a better grip that way.

What glove is it that you’re currently using?

I’m using a Vaughn 7800 V5 Glove. I’ve used it for a year now. I tried some different ones and this was the one that I like the most. It’s pretty soft … and it does the trick. 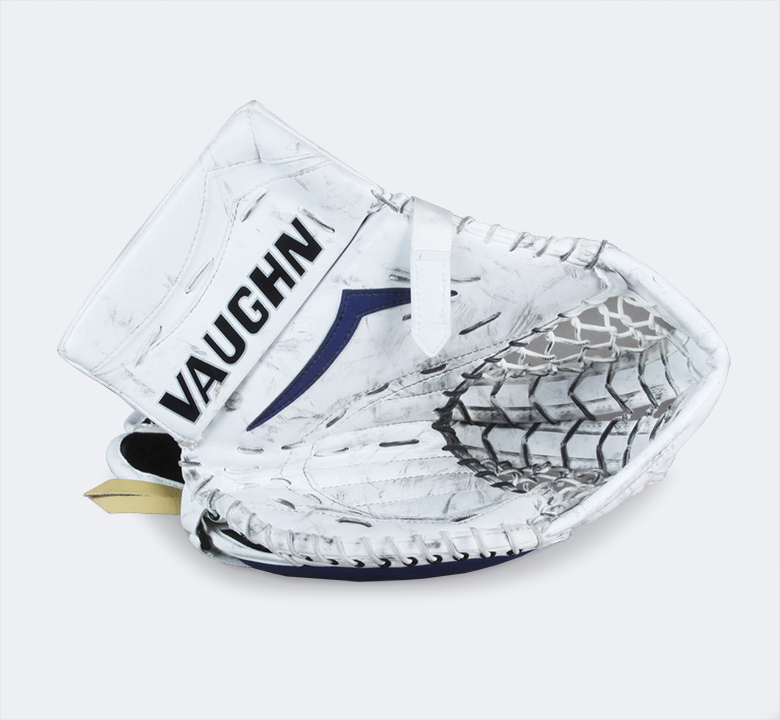 Do you know the size?

… No. (Laughs.) I mean, I’ve got pretty big hands. There’s a lot of room for my hand in there, but, uh, in general as a goalie I think you want it to be as big as possible to take up as much net as possible. This one will be right on the edge of what’s allowed and not allowed, but, you know, on the right side of it obviously. (Laughs.) And it’s the same thing (as my stick) actually; I want to have it light.

I actually have a practice glove too that’s a little heavier. For, you know, getting a lot of shots in practice, you don’t really catch them all clean — you’ll get them in the middle of your hand a lot. When you get a few hundred shots every day, you know, your hands starts to hurt. So that’s why I have a practice glove that’s a little heavier with more protection too. This here is my game glove, so it’s not as much protection; it’s more about the feel and being able to catch it properly.

Looks like you’re using a double T — any reason why you chose that style over the others?

Yeah, same thing there. Like I said, I probably tried 10 different gloves and this was the one I liked the most. I tried all kinds of pockets, different versions and all that. I just felt like the puck stayed in the netting here more on this one than the other ones, so I just stuck with this one.

Any tips for the younger goalies on breaking in a new glove?

Uh, well, I like it to be round. Some goalies like it to be more flat, maybe to cover more (net), but I like it to be more round so if the puck maybe doesn’t go into the pocket right away, maybe it bounces into the pocket. So I actually take like a lacrosse ball or softball and put it in the middle, then I tape it … I’ll let it sit like that for maybe a day or so. That creates that roundness to it. Then after that just use it for a few practices and it should be good to go.

I think I have it pretty loose. I think over my career I have probably lost my glove on the ice a couple, three times or so. (Laughs.) Yelling at the ref and the ref is looking at me, he doesn’t really know what to do … if he should blow the whistle or what’s going on, so I’ve been playing without the glove a couple times, but, uh, so I guess I play with it pretty loose. Other than that, it’s no secrets.

Let’s move on to your blocker; what are you currently using?

My blocker is also Vaughn. I believe it’s a Vaughn V6 2200. I mean, for me, I think a blocker is a blocker. I don’t feel a lot of difference between the brands and models and all that. Sometimes you can feel a difference in how the stick is in your hand. It can be kind of awkward sometimes if you want to have a different position and you feel like you can’t really get there because of all the padding and all that. But in the end, I feel like if I use a blocker once I feel good with it. I mean, I know some goalies are really careful when they pick their blocker, but for me I’ve never had a blocker that I didn’t really feel good with, so this was an easy choice. 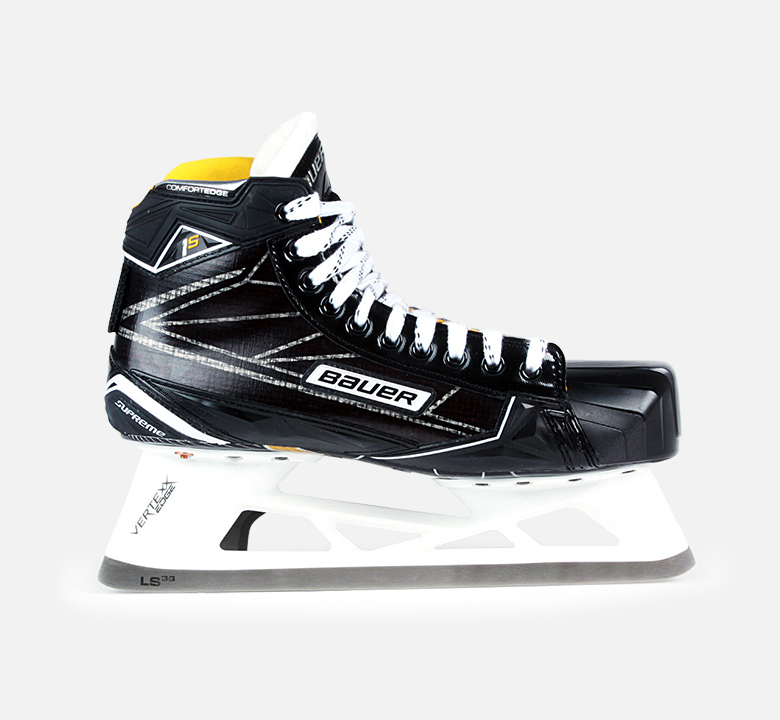 I see you’ve brought two pairs of skates here — are you in the middle of switching?


All right, let’s start with your old skates. What kind of skates are these? 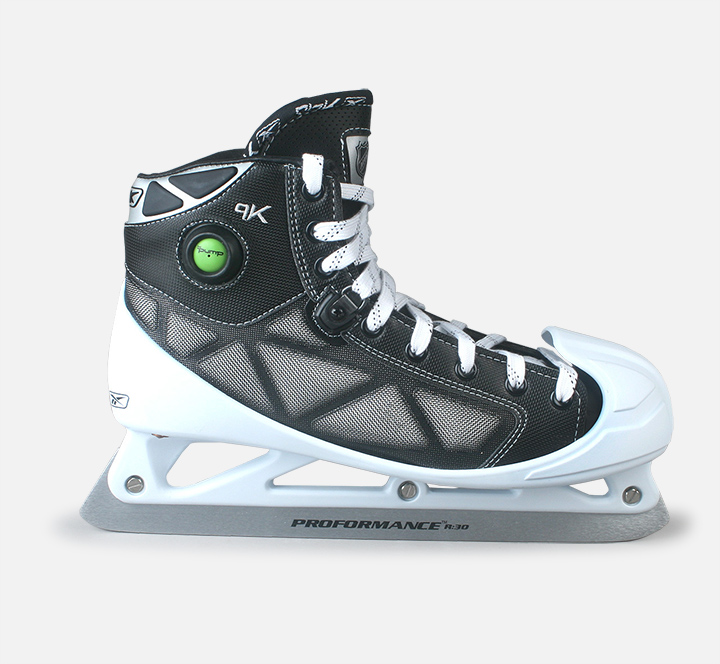 These are the skates I played with the last eight years or so. It’s Reebok … it says 9K. I mean, I don’t think you can even buy these anymore. I even had this exact pair before I came to the NHL, so this pair has been around for a while. I don’t know if you can see, but it’s kind of broken down a lot … but they still do the trick and they work. They’re comfortable and I like them. But they’ve been around for a long time and that’s why I think that it’s probably time for me to change … because if they were to, you know, break then I can’t really get a backup pair.

That’s why (last season) I tried the Bauer ones, the new Bauer (Supreme 1S), which I actually liked — I was surprised that I liked them right away. You’re actually able to, when you’re in the butterfly, you can get the steel onto the ice earlier when you push to the side. So, uh, I think you gain like 10 percent or something like that on the angle when you’re pushing sideways. So that’s something that actually made me want to try them, and so I’ve tried them maybe a couple, three times, but so far I’m thinking this is the pair I’m going to use for the season.

Are you aware of what profile you use for your skates or how you like them sharpened?

Well you’ve gotten this far without it so I think you’re doing all right.

Let’s check out those pads … what kind of pads are you using now? 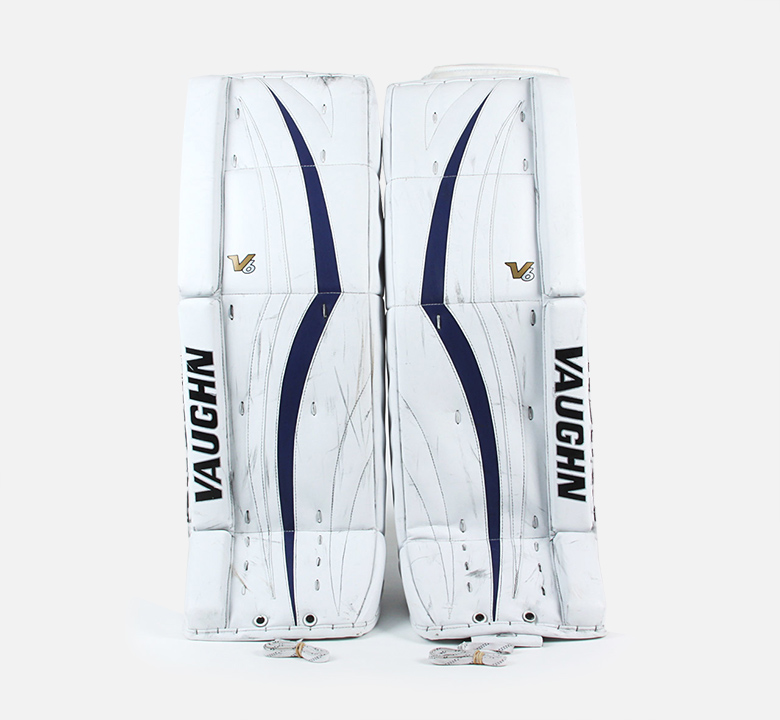 Uh, again it’s the same thing, Vaughn. I think, uh, they’re pretty standard. Maybe a little stiffer than what you’ll see in the shops, but in general pretty standard. I’m not 100 percent sure but I think they’re a V6 (2200 Pro). I used them for a year now and I like them. I like the balance I get when they’re flat on the ice, and (they have a) good feel on the ice — not too heavy. So, yeah, I like them.

How often would you say you get new pads?

It depends. It depends on how much you’re playing and all that. But I would say … in a year, maybe three or four times.

What is it that makes you say, “I need new pads.”?

I can imagine you won’t be the best person to ask for advice on breaking in new pads then, huh?

Yeah, like I said, I like them stiff so I like them when they’re brand new. I could use them for one practice and then go out and play a game with them. That’s when I feel big in them; that’s when the puck is bouncing where I want it, I feel good. I know that some goalies are the exact opposite. They want them to be super soft and that’s when they feel good. So they need to wear them for weeks and do lots of different things with them and bend them and stuff like that … put them in sauna … different stuff — but that’s not me.