Not everyone uses hockey skate guards. Not everyone uses skate soakers. Yet when it comes to skate blade covers (and yes, as far as we’re concerned, guards and soakers are two different items under the umbrella term, “skate covers”), hockey players should probably use both.

Quality versions of either can be had for less than $20. In the end, it's completely worth it to protect the one piece of equipment that makes hockey the high-speed thrill sport it is. 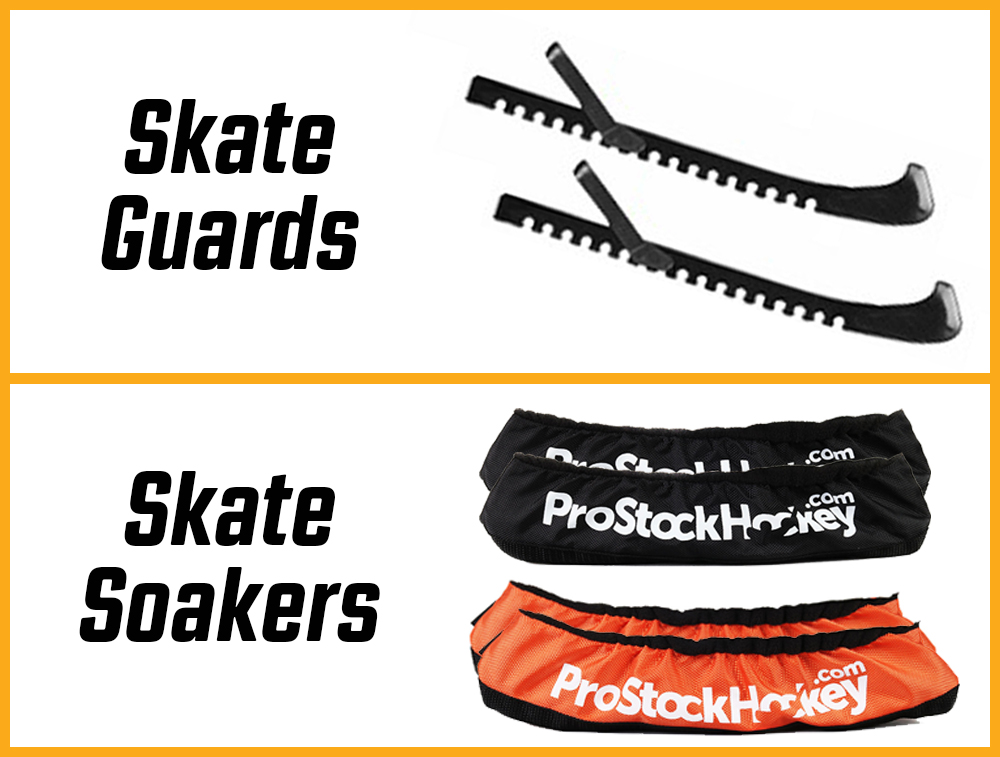 Skate guards are typically a hard, slim plastic cover designed to protect the sharp edge of your blades. They’re fine for avoiding nicks from other gear in your equipment bag, protecting your hands while blindly fumbling through your bag and from tearing a hole in the side of your bag. They also have a functional aspect, allowing you to walk freely off ice without ruining your steel.

(Just remember to make sure you’ve taken them off before going over the boards!)

Skate soakers are the soft, cloth-lined pouches that fit over skate blades not unlike a shower cap popped over your mom’s bouffant. However, where her shower cap was designed to keep her ’do dry, soakers help your blades become dry. They’re a better option for any use besides walking.

When a game or practice is finished, a player should wipe down his or her blades and boots with a towel. When the blades — mounting hardware as well as the sharp parts — are dry, on go the skate soakers.

Any leftover moisture or condensation that occurs as the blade warms will be wicked away, keeping the blade dry. If moisture is left on a blade — or worse, trapped against the blade by a skate guard — rusting will likely occur.

As for when you should take your soakers off, consider both the blades and the soakers themselves. Blades retain the cold of the ice for a long time, and skate soakers should stay on until the blades reach the temperature of the room in which they are stored (and yes, it is better to avoid areas without moisture control, like a garage or the trunk of a car).

Remember, though, that soakers need to dry, too. They might do so even while on the blades, assuming the skates aren’t zipped into an equipment or skate bag. Still, it is best, between uses, to remove skates from a bag so they can “air out” and to have a backup pair of soakers so you can rotate them.

Never store your skates with hard skate guards on them. That will promote corrosion.

Options are plentiful. While solid colors are common, prints from camouflage to candy canes are available.

Beyond that, animal-head skate blade covers are available — and lest you think the penguins, unicorns and poodles are only for kids’ skates, many will fit adult blades.

If you want to take it even further, there is now an option for a hard guard with wheels attached, essentially turning hockey skates into rollerblades. While they don't claim to provide the moisture-wicking properties of skate soakers, some of the options have side drainage holes designed to keep water away from blades. As to be expected, this is the priciest of the options but it may be worth it to those who would rather glide than walk.

Regardless of the option you choose, remember to keep your blades dry and your edges sharp. Otherwise, you'll quickly find that hockey isn't nearly as much fun with dull, rusty blades.