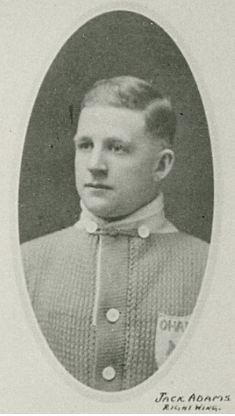 Jack Adams, while with the Toronto Arenas

There’s a reason Jack Adams (1894-1968) has an award named after him. Being the only person to have won the Stanley Cup as a player, coach and general manager, Jack Adams is synonymous with the game of hockey. Born in Fort William, Ontario in 1894, Adams’s hockey career started in 1914 as a player for the Fort Williams Maple Leafs in the NHML, and ended in 1947 after 20 terrific seasons as head coach of the Detroit Red Wings.

A tough player with 366 career PIM (penalties in minutes), Adams made his real mark in the league as a head coach. In his 20 years as Red Wings head coach and GM, he racked up success after success:

To memorialize this legendary coach, the NHL created the Jack Adams Award in 1973. It is bestowed on the NHL coach who contributes the most to his team’s success. The winner is selected by the National Hockey League Broadcasters’ Association after the regular season. You can read more about the Jack Adams Award in the NHL Awards section of Pro Stock Hockey Resources.