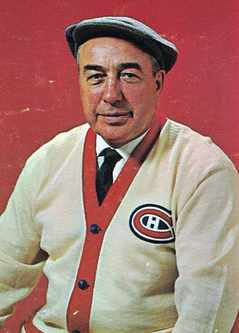 Who are the best NHL coaches? Who are the winningest NHL coaches? In this series, we’ll take a look at the best of the best, the head coaches who lead the pack in terms of victories and other qualities that define excellence in coaching: longevity, championships, winning percentage — and those elusive but crucial “intangibles.”

Here’s a little background on these terrific NHL head coaches.

1. Jack Adams (1894-1968) gets the biggest possible consensus-nod as a top NHL coach, since the NHL coach of the year trophy is named after him. Adams, from Fort William, Ontario, coached the Red Wings for two decades and won four Stanley Cups. He’s also the only man to win Cups as a player, coach and GM.

3. Mike Babcock (1963- ) was longtime coach of the Detroit Red Wings and currently leads the Toronto Maple Leafs. His Red Wings were a dominant team throughout his tenure, winning the Stanley Cup in 2008. From Manitouwadge, Ontario, Babcock also coached the Anaheim Mighty Ducks before coming to Detroit, and took them to the Stanley Cup Final in his first year.

5. Scotty Bowman (1933- ) has won the most games of any head coach in NHL history. He coached the Blues, Canadiens, Sabres, Penguins and Red Wings, winning a league-leading nine Stanley Cups. From Verdun, Quebec, Bowman has been instrumental as an advisor to the Blackhawks in engineering the team’s resurgence since assuming that role in 2008.

7. Joel Quenneville (1958- ) has been head coach for the St. Louis Blues and the Chicago Blackhawks. As coach of the Blackhawks, he revived a struggling franchise and brought the Windy City three Stanley Cup championships. From Windsor, Ontario, Quenneville is second only to Scotty Bowman in career wins as a head coach.

8. Pat Quinn (1943-2014), from Hamilton Ontario, was head coach for the Philadelphia Flyers, Los Angeles Kings, Vancouver Canucks and Toronto Maple Leafs. A two-time winner of the Jack Adams Award, he was a winner wherever he coached.

9. Glen Sather (1943- ), from High River, Alberta, coached the Edmonton Oilers from 1976-78 when they were in the WHA, and from 1979-94 when they joined the NHL. His teams won four Stanley Cup championships. (Think it’s easy to win championships with a superstar such as Wayne Gretzky? Here in Chicago, we know how hard it is, but Phil Jackson and the 1990s Bulls are another story.)

The problem with lists like the nine best NHL coaches is that many great, deserving individuals are left out. Other NHL coaches with spectacular resumes include this group of nine: Pat Burns, Hap Day, Ken Hitchcock, Punch Imlach, Mike Keenan, Lindy Ruff, Darryl Sutter, Barry Trotz and Ron Wilson.

In other Resource Center articles, we’ll take a closer look at each of our nine winningest NHL coaches — their resumes, coaching styles and perhaps a few bits of NHL coaching trivia.