Toe Blake (1912-1995) was a stellar amateur hockey player who went on to have a legendary playing career with the Montreal Canadiens. Despite his accomplishments on the ice, Joseph Hector Blake will be remembered for his coaching achievements as long as the game of hockey is being played. 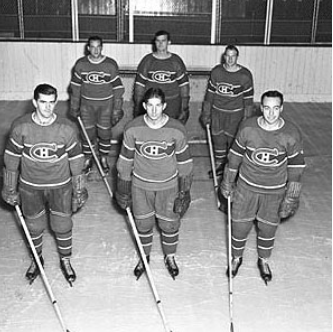 Born in Victoria Mines, Ontario, Blake participated in junior and senior hockey in the late 1920s and early 1930s, and played on championship teams. After a season with the NHL Montreal Maroons in 1934-35 (the Maroons won the Stanley Cup that year, though Blake did not play) and the CAHL Providence Reds the following year, he joined the Canadiens in 1935 as a left winger. His 13 seasons playing for the Canadiens were remarkable:

An injury forced Blake to retire in 1948. He immediately went into the Montreal system as a coach for its various minor-league affiliates. In 1955-56, he became head coach of the Montreal Canadiens.

All things considered, Blake sounds a lot like a hockey version of Bobby Knight. Blake was a decisive leader and was known for being tough on his players. Although he had a sense of humor and generally treated players with respect, he could lash out and had no problem embarrassing a player publicly if circumstances required it. He constantly pushed himself and everyone around him to do better, and he had a tremendous work ethic. He was also respected by players and opposing teams for being highly intelligent and a crafty tactician.

Blake inherited a great team and organization when he became head coach of the Canadiens, but there’s no doubt he got the most out of his talent. In sports, it’s often the case that great individual talent doesn’t always add up to championship teams — it takes a world-class coach to make that happen.