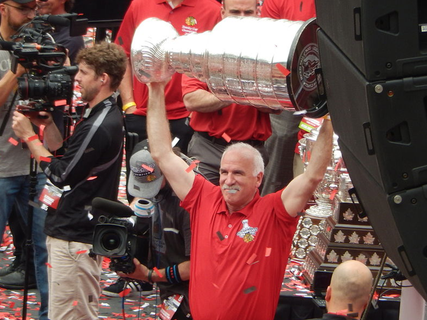 Joel Quenneville — or Coach Q, as he is often called — currently ranks second all-time for NHL career wins. He racked up impressive records behind the bench for the St. Louis Blues and the Colorado Avalanche, but Coach Quenneville had his biggest success during his 10 full seasons with the Chicago Blackhawks.

From Windsor Ontario, Quenneville was a defenseman in the NHL from 1978-79 to 1989-90, playing for the Toronto Maple Leafs, Colorado Rockies, New Jersey Devils and Hartford Whalers. In his 803 regular-season NHL games, he produced 54 goals and 136 assists.

Quenneville took over for Mike Keenan in St. Louis halfway through the 1996-97 season. He took the Blues to the Stanley Cup Playoffs each of his first seven seasons. The Blues lost steam in his eighth season, and was let go with 21 games remaining in 2003-04.

From St. Louis, Coach Q became head coach of the Avalanche, where he remained for three seasons. During his time in Colorado, he reached two milestones: 750 games coached and 400 wins. After the 2007-08 season, he left Colorado to become head coach of the Chicago Blackhawks.

Coach Q was the right man in the right place at the right time when he came to Chicago in the 2008-2009 season. The Blackhawks had been struggling for decades, but with new owner Rocky Wirtz having taken the reins in 2007, improvements were coming quickly. In his 10 full seasons with the Blackhawks, Quenneville’s achievements included:

Multiple professional team championships in Chicago is a rarity. The only other coaches besides Quenneville to do it were:

Quenneville had great players in Chicago, including Patrick Kane, Duncan Keith, Brent Seabrook and Jonathan Toews — and a host of second- and third-line players who could have been first-liners for many NHL teams. Nevertheless, great individual talent is no guarantee of success in professional sports. In fact, getting big-time players with big-time egos to play as a team is an extremely difficult coaching challenge. Quenneville rose to the task just as Phil Jackson had done so with Michael Jordan and the Bulls.

The Blackhawks began to sputter in the 2017-18 season, and continued to unravel in 2018-19. Willing to make bold moves, the Hawks let Coach Q go 15 games into the season, surprising many fans. Born in 1958, Quenneville has plenty of head coaching fuel still in the tank; it will be interesting to see where he goes from here, and how much more he can rewrite the NHL coaching record book.

Always looking like he’s ready to explode during a game, Coach Q’s menacing demeanor behind the bench belies a coaching style that stresses teamwork, personal responsibility, collaboration and open communication. Decisive and blunt, Quenneville is content to work behind the scenes and let his players take center stage. Players respect him and enjoy playing for him — and who wouldn’t, considering his success?