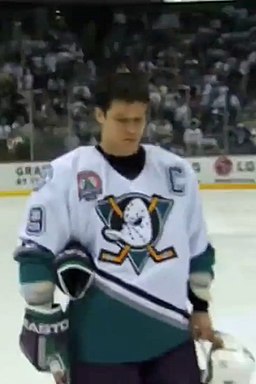 If you were playing word association and the other person said, “hockey,” the average person might respond with “ice” or “exciting” — but wouldn’t blurt out, “Walt Disney.” Even though Disney has released movies with a wintry feel, such as “Frozen” and “Snow White,” if you call an NHL player Elsa or Dopey, you’re likely to get a couple of your teeth knocked out.

But as all Southern California hockey fans know, The Walt Disney Co. indeed once owned an NHL franchise, indeed named it after one of its movies — and indeed not only avoided getting punched in the corporate teeth, it created a uniform for the Mighty Ducks of Anaheim that has gone down in hockey history as one of the greatest of all time. While the current Ducks uniform looks mighty fine, the judging committee here at Pro Stock Hockey thinks it just doesn’t compare to the even mightier original Mighty Ducks hockey jersey, both in terms of design and also fan reaction.

The franchise that is now the Anaheim Ducks started out in 1993 as The Mighty Ducks of Anaheim, named after a highly successful 1992 Disney film, “The Mighty Ducks,” about an unlikable attorney forced to coach a ragtag peewee hockey team for his community service court sentence.

The premiere of the original Mighty Ducks hockey jersey made as big an impact on hockey fans as a new Disney movie. The Mighty Ducks’ primary logo broke new design ground in the NHL, featuring a cartoon-like yet menacing duck-shaped goalie mask, with two yellow crossed hockey sticks behind it over a teal-and-black background. The creativity of the image, uniform design and color scheme — worthy of and fitting for a Disney-owned hockey team — raised the bar for NHL logo and uniform design.

The original Mighty Ducks home jersey had a color scheme that matched that of the film’s hockey team — purple, jade, silver and black. The jersey featured diagonal striping across the center, above which rested the simple, menacing duck logo. The overall feel of the Mighty Ducks jersey was aggression with a dash of playfulness, not at all unbecoming for an NHL franchise.

The original Mighty Ducks jersey has stood the test of time, being one of 16 chosen by the league as the greatest NHL logos of all time. In 2017, editors of theScore ranked the original logo at No. 6 on its list of the NHL’s greatest logos.

Return of the Disney Duck

To commemorate their 25th anniversary in the NHL, the Ducks brought back the original logo and jersey design for their 2018-19 alternate uniform. The color scheme and jersey design are quite similar to the original. The most notable differences are the crossed hockey sticks are now orange rather than yellow, and the new Ducks colors are incorporated in the uniform design as well as the original ones. Ducks fans welcomed the nostalgic return of the old logo and colors, and — who knows? — perhaps the menacing duck goalie mask will rear its head on the ice more often in years to come. It’s likely that Anaheim Ducks fans would be very happy to see that.