The NHL and the NHLPA have agreed to a 56-game regular season schedule with games set to start on Wednesday, January 13, 2021. The National Hockey League continues to stress that their priority is the health and safety of the players and communities, which makes this announcement subject to change if it is deemed unsafe to continue play.

Also included in the agreement was a realignment of the current divisions into four new divisions: North, West, Central & East.

The old Pacific Division is now the West Division. With the subtraction of Calgary, Edmonton and Vancouver, the West has added Arizona, Colorado, Minnesota and St. Louis. They join Anaheim, Los Angeles, San Jose and Vegas to fill out the remaining spots in the West Division.

The East Division is similar to the old Metropolitan Division, with just two teams swapping spots. Due to Carolina and Columbus being sent to the Central Division, Boston and Buffalo found themselves included in the East Division along with New Jersey, New York (Rangers), New York (Islanders), Philadelphia, Pittsburgh and Washington. 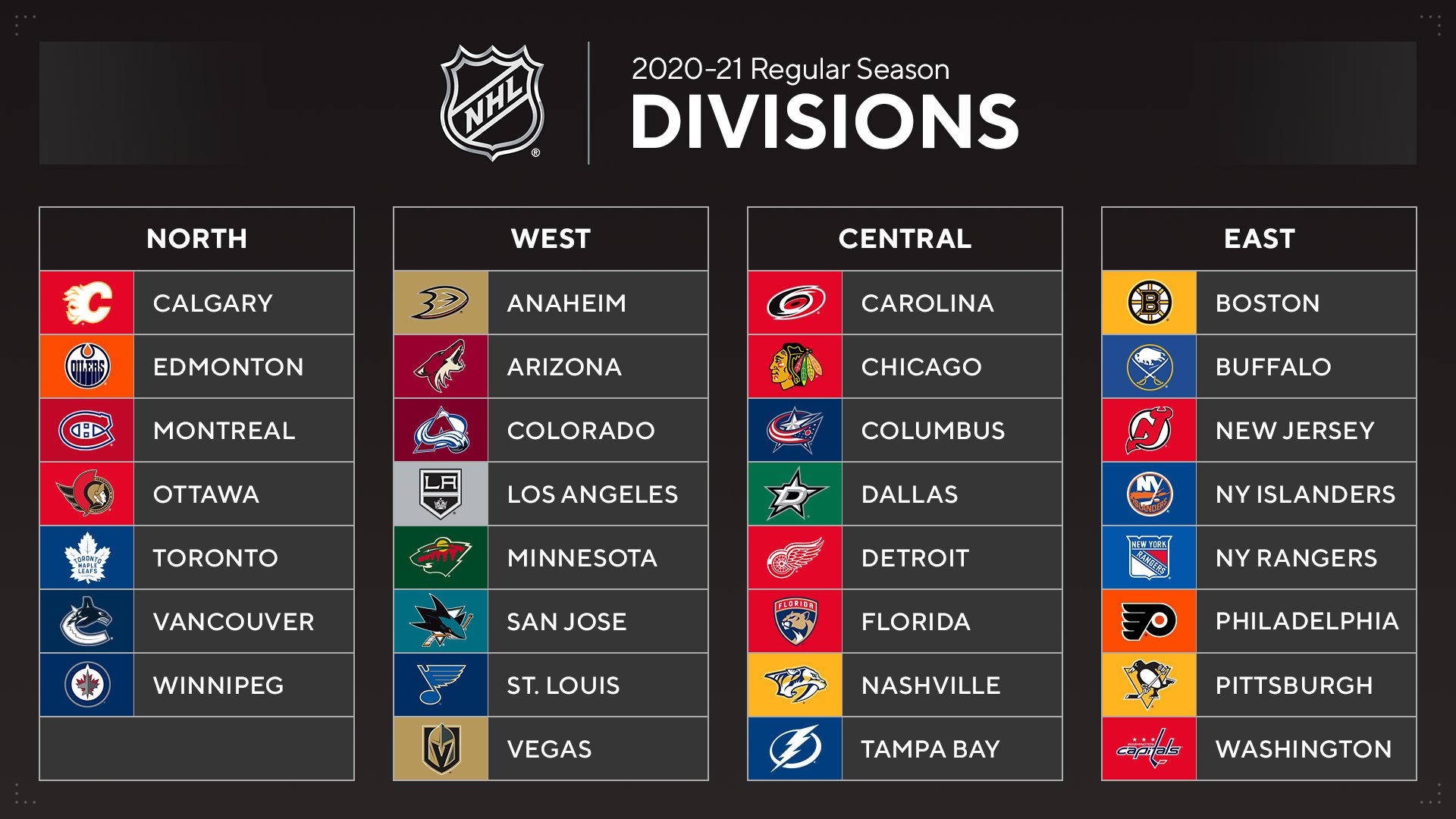 Many of you may be asking yourself “But how will the Stanley Cup Playoffs work?” and luckily the NHL Public Relations team has already provided us with an answer:

“The Stanley Cup Playoffs would feature 16 teams in the traditional best-of-seven, four-round format and conclude around mid-July with the plan of returning to a “normal” hockey calendar for the 2021-22 season (regular season beginning in October).

The top four teams in each division will qualify for the Stanley Cup Playoffs, with intradivisional play in the first two rounds (#1 vs. #4; #2 vs. #3). The four teams that advance to the Semifinal Round would be seeded by their regular season points total, with the No. 1 seed playing the No. 4 seed in one series and the No. 2 and No. 3 seeds meeting in the other.”

The 2020-21 NHL regular-season schedules for each team have yet to be announced, but they are set to be released in the coming days. However, we do know that there will be no games played against out-of-division teams until the Stanley Cup Playoffs. Each team will play every other team in their division eight times throughout the shortened season (nine or 10 times for the North Division).

The question of where these games will be played is also up in the air. The current plan is to play games in the home arenas of the participating teams (with or without fans depending on local market conditions), but the League is also preparing for a situation to develop in which they must move one or more games to a “neutral site” should it become necessary.

It may be shortened, and it might look a bit different this year, but an NHL season is a gift most hockey fans are happy to have received for the holidays.